As mentioned in my last post, I have been adding a number of things that belong to my husband's family to our household. His dear mother, Betty, has downsized into an assisted living apartment. I've been working my way through a stack of linens and was delighted to discover a beautiful tablecloth that is so wonderful that my enthusiasm is undiminished. Even after a week of  working on a stain--gone! Even having spent the greater part of a day at the ironing board.

My friend, Bobbie H., asked if the tablecloth had "a history."  Today (Valentine's Day) DMP and I took his mother out to lunch and I asked her about the tablecloth.

In the Spring of 1957 the family went on a cruise from Puerto Rico--where they were stationed while Charles was flying SAC missions out of Ramey AFB and where Bryan was born--to Panama. Nine-year-old David learned to play chess during that cruise.

Betty bought the tablecloth in Panama. She said, "The Army/Navy tablecloths had been around a long time but they finally made one for the Air Force. I'm sure it was made in China as most were then."
"China" in this context denotes Taiwan, the source of high quality linens in the mid-20th Century. Betty's cloth is all high end textile, no polyester, and appears to me to be hand sewn.

Similar antique and vintage tablecloths are usually called "Army/Navy" cloths. They are typically composed of alternating square panels of embroidered and cutwork linen and hand made filet lace, bordered in filet lace. All hand made of natural linen/cotton  and stitched together by hand, it is a tour de force of textile art. Examples have been found dating back to the Civil War. Some sources say it was the style of tablecloth used in the Army Navy Club in Washington, D.C.
﻿

My guess is that the octagonal shape is what distinguishes the Air Force cloth from the Army/Navy cloth.
﻿﻿﻿﻿
A half-octagon is the rather stylized wing of the current USAF logo. That logo was not adopted until 1970 but the bottom section of the USAF shield is that a half octagon. The lower section of the Army shield is almost square; the Navy's, triangular.
Note also the repeated ^ ^^ shapes in the cut work and the filet lace which might also be a wing motif. 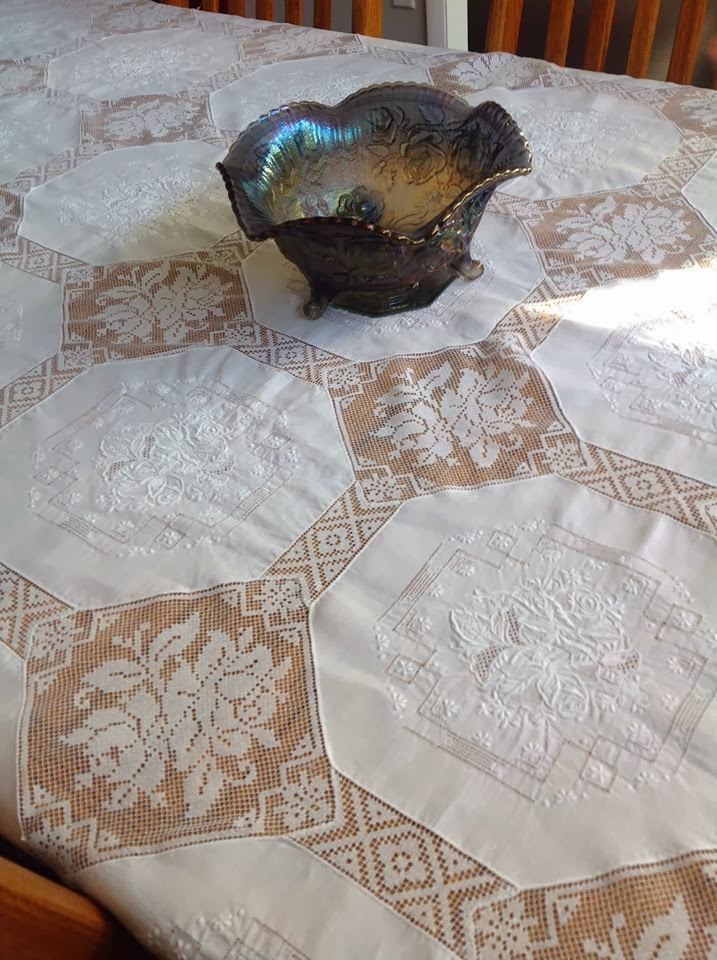 I especially like the rose embroidery and lace panel because it goes so perfectly with the Open Rose footed fruit bowl (Imperial Glass) which my mother bought in the late1970s from the old back room inventory when Brown's (or was it Baker's?) Store in Lockney went out of business.

I always keep a mirror under the bowl to reflect the light.

I love my table where friends and family gather but I do not ever plan to use this particular tablecloth during a meal. It is truly vintage collectible, now at least 57 years old.

Also, I am not eager to wash and iron it anytime soon.

Here is a link to a some good advice on caring for antique and vintage linens:
http://www.vintagetableclothsclub.com/stains.htm
Posted by K Cummings Pipes at 7:03 PM

Bobbie Abston Huebner:
How interesting and how lovely is this cloth. Thank you for giving the background - even back to the Civil War.