This painting by Helen Allingham (1848-1926) "Old Worn Woman" reminds me of an illustration in one of Evelyn Whitaker's books or maybe its cover.
I need to follow-up. No time just now.
A link to the blog where  I found it from the BWWA facebook group.
https://reveriesunderthesignofausten.wordpress.com/2015/08/19/helen-allingham-1848-1926/ 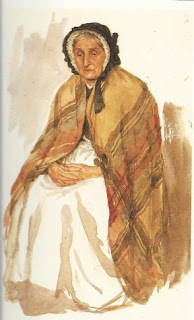 Posted by K Cummings Pipes at 6:22 PM No comments:

Sometimes I need a Yia Yia...


I am not feeling well today and what I really, really want is a huge bowl of Yia Yia's Chicken Soup from my favorite Greek restaurant which closed several years ago when the owners went home to Greece to care for an aging mother. I miss them, I miss the restaurant, I miss the herbed lamb souvlaki, but most of all I miss Yia Yia's chicken soup.

The healing powers of chicken soup are legendary. I was never really sure if it was the soup or the maternal hands that prepared and served it.

My own mother, an excellent cook, did not often make soups. She made stews laden with big chunks of meat and home grown vegetables. Her chicken and homemade egg noodles can warm a winter's night and right a world turned upside down.
Both my grandmothers cooked much like my mother. My maternal grandmother, Mary B. Wieland's German heritage added thick stews made with sausage and cabbage and beets and potatoes, lots of potatoes--all delicious but none serving much medicinal purpose.
We are a generally healthy clan with appetites to match and have little need for "invalid cookery."*

"Invalid" is an interesting word rooted {and now I'm down the rabbit hole} in the Latin, meaning"not strong" or "without strength" which in the 17th Century came to be used for the sick and infirm. It is a word that now may be considered politically incorrect, as are a couple of its synonyms e.g. "illegitimate" and "illegal."
Adjectives applied to people are increasingly at issue. I think that sometimes we use language to define, to limit, to stereotype, to divide, to disempower. Our words reveal our thinking of "them" as something other, of something less than I. It can say "you are not one of us, you do not matter." It comes as no surprise that people may be hurt (which might have been part of our intent) and may become angry and object to our attitude and to our words. Those "words that never hurt" can lead to  "sticks and stones" and suddenly the issue becomes political. To me it is seems less "political correctness" and more a matter of "treating others as you would like to be treated."
{Dear reader,  these rabbit holes and my compulsion to explore the world of words is one reason I never seem to get anything done. I've been lost in the dictionary, multiple cookbooks, a nursing archive, and the interwebs for hours. I usually call it research and I justify this excursion by noting that Evelyn Whitaker features many a sick room in her novels. In truth, I'm indulging myself because I'm not well.}

Returning to the subject at hand:
My husband's mother never enjoyed cooking and produced a brood of picky eaters who often prefer the pale store bought version to yummy homemade. David once said he thought it was "tragic that a cook of your skill and taste is married to a man who can so little appreciate really good food." His comfort food of choice is Campbell's Chicken Noodle Soup.
Campbell's out-of-a-can-with-too-much-salt-and-very-little-Chicken-with-overcooked-limp-pasty-Noodles-Soup that I find unbearably bland and barely edible. Nonetheless, there are always several cans in my pantry because "the healing powers of chicken soup are legendary" and an ailing husband must be comforted with chicken soup like his mother made.

I'm going to share a secret. The  woman who owned that Greek restaurant and made her Yia Yia's chicken soup said, "almost any soup can be turned into Avgolemono soup, even that nasty canned stuff can be improved with an egg and some lemon juice. Just remember to add lots of extra dill. Most of the recipes don't call for dill but that's how my Yia Yia made it and that's what you like."

Yes, I sometimes make Yia Yia's Chicken Soup using a classic recipe for Avgolemono (Egg & Lemon) Chicken Soup and I add dill, dried or fresh and lots of it. Like my Greek friend I may use the traditional pasta but "sometimes I make it with rice because you Houstonians like rice" and often I have rice already cooked in my fridge.
While I never had a Yia Yia, my soup is always very, very good.

Today I'm sick, much too sick to cook and I understand Mrs. Beeton's admonishment to ". . . give such food as affords most nourishment for the least work. . . ."*
Especially when the cook is also the patient.

Needing the legendary healing powers of chicken soup, I grab that Campbell's can from the pantry. I put it in a pan and add half a can of water. Then I add a lot of dill, dried and handy in my spice rack. (Sometimes I add a dash of onion powder and some celery seed but not today.) While it heats, I separate an egg and beat the yolk very well. I whisk the juice of a lemon into the yolk. Temper it with hot broth, then stir it into the soup.  I sometimes strain out those limp noodles and I hope there's some crusty bread or a few croutons, but, whatever is at hand,  I eat and feel better.

*Here is link to the 1907 edition of Mrs. Beeton's Everyday Cookery. London: Ward & Lock, which is in my collection. Her advice for Invalid Cookery is on pages 107-109 and there is no mention of chicken soup.
Here is another link with recipes from those chapters from an earlier edition. I think I'll just skip the Eel Broth and the Rabbits Cooked in Milk.

Miss Whitaker, Hinton, Twyford, Berks"
Alas!
For those of us who visualized the bunny frolicking on the meadows lawn and being petted by sweet children, it may well have been so until it was prepared per Mrs. Beeton's recipe for invalid cookery.}
Posted by K Cummings Pipes at 4:45 PM No comments: