"Righty tighty - lefty loosey" is not a political statement but the mnemonic that Mother taught me for screws, bolts, and lids.
I am most blessed to have been raised by a mother who did things. She was a superb carpenter. She had her own toolbox and often undertook minor--and sometimes major--household repairs. She had little choice. Daddy worked from dawn till dusk on the farm and often was up in the middle of the night to check irrigation water. He came home tired and dirty and ready for a bath, supper, and a few hours to read. She was protective of what little time he had to rest and be with us kids.
Another issue was the lack of professional help. Money was hard to come by, of course, but the real problem was rural isolation. We lived at least 26 miles over some pretty poor dirt roads from the nearest town where a repairman might be found. We were fifty miles from Lubbock, the nearest access to someone other than a handyman. I remember the Sears repair truck serviced our end of the county only one day a week at most. The schedule for the next trip might be full and it wasn't unusual to be told it would be two weeks. When they finally came, if they didn't have the part on the truck, it might be another week before they came back. Of necessity, Mother undertook her own repairs.
I wish I had followed her example last summer when shortly after the move, I got some error codes and a locked door on my washing machine. (Whirlpool, Duet, HE, front-loader.) I was exhausted from the move; the door was locked and wouldn't open; one of my collectible tablecloths was trapped inside. I called a repairman. A minimum of $85 but, by the time he was done, we were out several hundred dollars--enough that I considered just buying a new washer. I now wonder if the service technician didn't take advantage of this little lady. Something few men tried and none succeeded when dealing with my mother.
Today, when error code "5d" popped up and I noticed that the load of dog-washing towels was not properly rinsed, I googled: "Whirlpool duet error code 5d."
That code means that the machine is draining more slowly than expected. The problem may be caused by too many suds or by a clogged drain filter. I suspect a little bit of both in this case. The repair looked simple and I decided to troubleshoot it before calling a repairman.  Since my laundry is now inside an air conditioned utility room instead of a hot, steamy garage... I never cease being grateful for the ease of living in our new home!

I am my mother's daughter. I like to do things.
I found instructions here and gathered my tools:

Unplug the washer. SAFETY Note: always unplug anything electrical before doing anything at all to it.

Open the bottom panel by removing the three screws along the bottom. My washer is on a pedestal  so access was easy. A mirror and flashlight helped locate the screws.
Frustration: they were  not standard/Phillips screws but rather sh﻿﻿﻿﻿﻿﻿﻿﻿﻿﻿﻿eet metal nuts. Out to the garage tool bench, where I found the nut drivers. I needed the 1/4 inch. "Lefty loosey."
It came out OK but I noted that one of nuts was rusted. So I made sure to clean it with WD-40.
If it had been too tight for me to undo, I would have needed a penetrating oil spray like WD-40 or Liquid Wrench. That would have meant spraying and waiting for the spray to dissolve and loosen the rust but all I needed for this particular job was "lefty loosey." 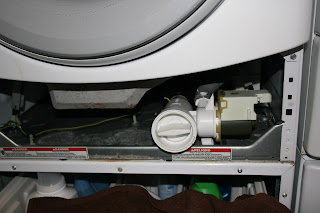 The drain plug was on the right hand side. Positioning a dishpan and making sure there was a big towel at hand,  I removed the plug.

Water, lint, a dead bug, and a dime gushed out. (Sometimes I understand that people find those missing socks!)

Inside the drain are 2 holes. The one in the back goes to the drain hose and I checked that it was open. There was also one to the pump on the side. I stuck a finger into that opening, felt for debris (there was none) and manually turned the pump propellers. All clear.
Wiped everything down. Put the drain plug back on.  "Righty tighty."

Plugged the washer back in and tested the repair by rewashing the towels. Oh, yes, still a lot of suds so that was probably most of the problem this time but it's good housewifery to clean that drain filter regularly, probably a couple of times a year or anytime you see a 5d.
All seems well, so I wiped all the surfaces and reattached the bottom panel.  "Righty tighty."

Instructions said it was easy and would take about 10 minutes. It was pretty easy but I think 45 minutes - 1 hour is a more realistic estimate, counting the time to find and read instructions, locate tools, discover I needed a different tool. Do the job. Clean up the mess and put everything back where it belongs. Still, $85/hour ain't bad.

Now I wish I'd tried these instructions for last year's locked door episode before calling the repairman:
http://www.ehow.com/how_5155941_fix-whirlpool-duet-washer-repairman.html

Most jobs are easier with the proper tools and not every housewife has access to a set of nut drivers or crescent wrenches or specialized screw drivers but good tools can be reused and are worth the investment.  For example, a single hollow shaft nut drive will cost less than $10. A complete set of 7 or so is less than $50. I could have bought nut drivers at Home Depot or Sears (Craftsman tools are the best!) and still have come out ahead. Fortunately, we have a bunch because my dear husband loves tools but really doesn't ever use them.
My "honey" doesn't "do." He'd rather read. (Like my Daddy and I.) And his honey can do it herself. (Like her mother.)
Posted by K Cummings Pipes at 4:10 PM 1 comment: 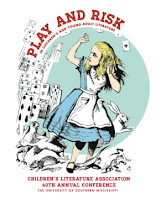 Just back from a wonderful conference in Biloxi, Mississippi hosted by the University of Southern Mississippi. I offer the first of several blogs I'm planning on the panels I attended and the books I read pre-conference. My blogging has been spotty of late, and I'm hoping to get back in the literary groove. I select this first topic because a friend asked me to take a few notes to share because she could not attend the Friday morning panel chaired by Amanda Allen, Eastern Michigan University. There were four panelists and these notes should be viewed as my impressions rather than their remarks unless I indicate otherwise by the use of quotation marks:


In Q&A  I did not identify either the questioner or the responder. Hitting the highlights:

Although I don't really have a career in children's literature, this was one of my favorite panels. Much of this advice is applicable to anyone in any career or stage of life. My gratitude to the speakers.