"Where'd ya get those eyes?"

The title for this post is from a 1938 song written by Harry Warren with lyrics by Johnny Mercer, orignally sung by Louis Armstrong in the movie Going Places.  Mother used to sing this song.   "Jeepers, Creepers, where'd ya get those peepers.  Jeepers, Creepers, where'd ya get those eyes?"  Listen to this excellent rendition on youtube.  I found myself singing the jazz standard today after I logged onto FaceBook and discovered that friend DW had Photoshopped one of my favorite pics despite the fact that DMP blinked: 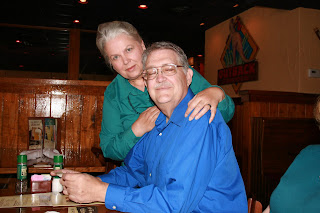 DW had used the quick selection tool to get those "peepers" and bit of the "cheaters" from another pose, copied it, pasted it onto this photo, moved it into position, deslected.  He said it took 2 minutes.  Golly, Gee! 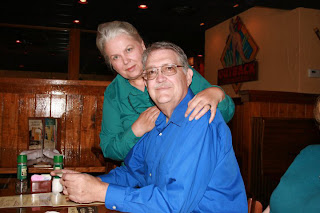 So I just had to try it for myself.  One of the things I love about shooting digital rather than film is that there is no cost associated with a shot.  When I shoot a group, I take several 3-5 as quickly as I can shoot, hoping to catch a good one.  That usually works but sometimes the best pose of each person in the group is in a different shot.  This is a group shot of my cousin's family.  It was the best shot I got of the guys but E's eyes are closed.  M looks good but several folks preferred a shot where she was laughing. 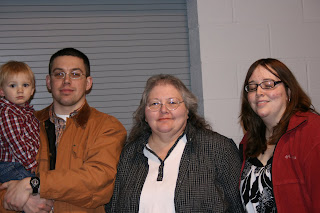 Below is a demo.  I first retouched with the spot healer tool to remove a blemish or two.  Then I used the quick selection tool to open E's eyes just like DW had opened DMP's eyes.  It took me several attempts to master the quick selection tool.  Then I deselected. I could have stopped there but I thought it might be interesting to try a head replacement.  I found another shot where I selected the happier face for M. and used copy and paste to move it and deslected.  This demo shows the selections before they were moved into position.  It also helps if there is some clear edge marker to help position.  That little bit of white from M's collar was a big help.  The nose bridge of the glasses also helped.  (Remember I actually did this as a two-step process.) 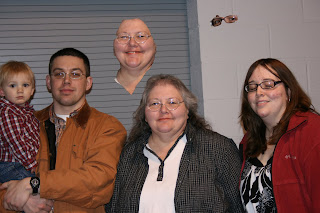 The photos need to be the same size, the same pose. A sequence of tripod shots, taken quickly before people had time to move their heads around, would be ideal. It's worth a try in any group that is not quite perfect if you remembered to snap several shots. 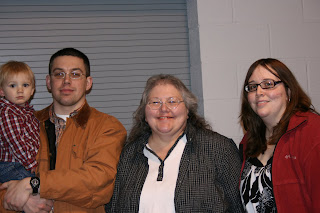 And I think you could use this application for insets and other "arty" things if you enjoy playing around.  I love it when I learn something new.  Thanks, DW
I use Adobe Photoshop Elements 8.
Posted by K Cummings Pipes at 3:22 PM 3 comments:

Sometime ago I removed the followers list from my blog because it is rather public and searchable and a number of my followers appeared to me to be blogging private matters that they might not wish to have so broadly shared.  I just did it; I didn't ask.   For similar reasons, I seldom mention names in my blog.  I use initials so that mutal friends and family usually know of whom I'm writing but the more public readers will be left guessing.  I'm assuming everyone knows that DMP is my husband, David, since that information is rather public but DMP doesn't preview and approve my blogs and he's not on facebook, so I offer the same courtesy to him that I do to others.  Frankly, I enjoy playing at the old literary tradition of Lord A... and Lady L... of ....shire.
I don't usually ask for opinons.  I'm quite decisive and I've found that if I ask for an opinion and then do something else then those I asked may be disappointed or even offended.   It only gives people an excuse to offer comments that I don't care to hear.  But I do have a dilemma regarding my blog and would appreciate some input from its readers, even those who are anonymous to me.

I am posting a poll on the left sidebar but before you vote let me share a few thoughts:
So let me know what you think by taking the poll or offering comment if you prefer.  Thank you and please don't take offense when I make the decision.  As I have told several of my blogger friends:  "It's your blog; do with it what you will."
Posted by K Cummings Pipes at 10:23 AM 4 comments: