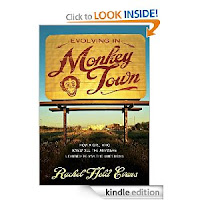 SEASONS (my women reading theology group at church) will meet on Saturday to discuss Evolving in Monkey Town:  How a girl who knew all the answers learned to ask the questions  by Rachel Held Evans.  (link to amazon to sample the book)  It's a book that would have been a huge help when I was a freshman in high school and first met Mr. Darwin and his theory.  Like the author, I found  science challenged my faith.  Unlike the author, I kept my own counsel--for decades I shared my doubts with only a very few trusted ones.

After a brief time of private atheism, I found that I just could not live if life--all life, my life--was random accident. The world is full of beauty and I can never quite shake the thought that beauty has a source and a purpose and that somehow beauty and truth are linked. "Beauty is truth, truth beauty,' – that is all  Ye know on earth, and all ye need to know." So Keats and other nature poets formed my canon. For many years, I kept a journal that consisted of each day's one moment of supreme beauty and found myself feeling gratitude.  To whom?   Having been a doubting Christian, I became a doubtful atheist.  Beauty, gratitude and those second doubts led me step-by-step back to faith.  I came to think of God as "source and sustainer."

My mother, with whom I had shared some of my doubts, encouraged me to just read the Bible, and reach my own conclusions about what it said and what it meant.  She suggested I start with the  Psalms--more poetry.  The Writings of Hebrew Scripture--wisdom literature, the prophets, the song book of Israel--became my primary biblical text.  Most Psalms are not didactic but responsive--responsive to life situations, responsive to pain, responisve to injustice, responsive to a community, responsive to God.  The Psalms are not afraid to question God and I learned to be honest (with myself at least) about my doubts because a God who is "source and sustainer of all that has being" is certainly big enough to handle my questions.

Like Rachel Held Evans, I was troubled by all the great crowd of people, past and present, who could not believe because they had not heard.  "If salvation is available only to Christians, then the gospel isn't good news at all.  For most of the human race, it is terrible news."  p. 92  I was well-versed in the Girls Auxiliary of the Women's Missionary Union but it seemed "not right" that God would condemn those who had been born at the wrong place and the wrong time and it was unrealistic to expect that missionaries could reach across geography and cultures and centuries to preach to all people and offer them the Jesus choice.   If there is a God, God must be as merciful as  just, as gracious as  righteous.   "The steadfast love of the Lord never ceases; his mercies never come to an end." [Lamentations 3:22-24; not all biblical poetry is found in Psalms.]

For people of compassion the idea of almost universal condemnation to eternal torment is quite troubling.  For many it is the sticking point; my father was concerned for all the Native Americans and for the hypocrisy he found in the church.  Even more troubling are the Christians who "are more offended by the idea of everyone going to heaven than by the idea of everyone going to hell." p. 113 My cousin is so troubled by what she learned as a child "from pretty Sunday school teachers who smelled like peppermint and let me call them by their first names"  p. 27, so offended by  unkind dogma, that she cannot even listen or seek the comfort that might be found in a more mature faith. 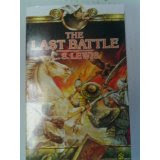 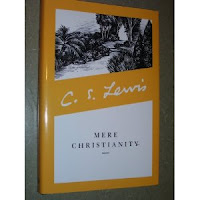 I was very comforted by C.S. Lewis whom Rachel Held Evans quotes on p. 139:  "We do know that no person can be saved except through Christ.  We do not know that only those who know Him can be saved by Him."  Even more comforting to me than Mere Christianity was the story from The Last Battle in the Chronicles of Narnia when the young warrior who has faithfully served Tash discovers himself in Aslan's country where he immediately loves the great lion who has always loved him.

By the time I graduated from college, I had a very thorough understanding of Darwin's theory, as it had been first written and as it had been revised.  I understood science far better and had a fuller appreciation of its beauty.  Oddly, the more science I learned and the more open my mind, the easier it was to say with Charlotte Yonge:  "some when, some how, God..."   For me there is no conflict between science and faith but there is an almost constant conversation between them.  I understand that science itself is not "the truth" but an understanding of truth in constant evolution. 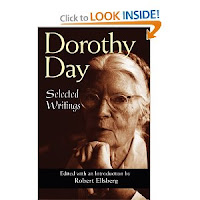 "By little and by little" [Dorothy Day] I found faith to believe... most of the time... and a few years of reading Zen taught me to think of Christian life as a practice.  Even when I feel no belief, I practice Christianity:  I meditate, I pray, I read the Bible, I assemble with the saints, I sing songs of thanksgiving, I devote myself to good works.

Like Rachel Held Evans, I learned that "obedience--with or without answers--was the only thing that could save me from this storm."  p. 106 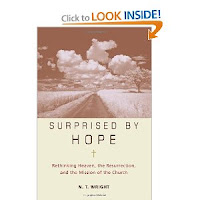 When I spend time studying the Bible and time reading books by serious biblical scholars, when I see new ways of understanding biblical text and the world around me, when I get to talk with others who are also asking questions, I find it easier to believe.  Among the more recent books that have evolved my faith is  N.T. Wright's Surprised by Hope (previously blogged) which is also mentioned in Evolving in Monkey Town p.173.

Most of my doubts are now a faint and fading echo but, for me, faith is never simple.   I walk a somewhat rocky Way through a dark valley.  I am a believer and  a Christian.  I take biblical text seriously.  I am neither a Fundamentalist nor an Evangelical.    I believe in God and in Christ Jesus, Messiah,  who brings life from death.  I believe in "love, joy, peace, patience, kindness, goodness, faithfulness, gentleness, and self-control."    Everything else is subject to change.

"Evolution means letting go of our false fundamentals so that God can get into those shadowy places we're not sure we want" God "to be.  It means being okay with being wrong, okay with not having all the answers, okay with never being finished." p. 23
Posted by K Cummings Pipes at 3:27 PM 7 comments: