One syllabus of my life...

I recently accepted a Facebook challenge: "One book a day, for seven days, which has had an effect on you. No details, just the cover."
Such a challenge can nearly kill me because I always have something more I want to say, but mostly I played by the rules. I chose 7 books from my library shelves, arranged them on my library table in the order in which I had read them, took a photo of each, and posted. After the fact, I realized that in some sense, this list was one possible syllabus of The Life I Read.
I had been tagged for the challenge my the daughter of my dearest high school friend. When Sarah and I were together, our conversations usually began, "What are you reading and what have you learned."  Our primary shared interest was science but there were multiple intersections and crossroads. She read a lot more art and music than I did; I spent more time with poetry and philosophy/theology. Our tastes in fiction/literature were very different but we were both working our way through the recommended reading list for college prep and it really helped to bounce our ideas of each other.
In Sarah's memory, I wanted the first book to be one that we had read and discussed. So I dug deep into the past for Book 1: Albert Schweitzer's autobiography, Out of My Life and Thought, originally published in 1931. Sarah and I read it circa 1965. I have revisited it several times over the years and I bought the 2009 version pictured.
"I can do no other than be reverent before everything that is called life. I can do no other than have compassion for all that is called life. That is the beginning and the foundation of all ethics."
- Albert Schweitzer
What effect did this book have one me? At a time when I was very unsure if I believed in God at all, it made me consider faith and belief from a different perspective.  I learned that meaningful faith required a lot more than the mental assent to a list of beliefs or even a series of regularly practiced rites and worship. Meaningful faith demanded a day-in-day-out practice (like playing any musical instrument well) and was grounded not only (or possibly not at all) in Scripture but in caring for others.
Meaningful faith required sacrifices of time, of thought, of talent, of work, of engagement with people and cultures that were not my own, and finally of life itself.
"We are all so much together, but we are all dying of loneliness." - Albert Schweitzer

I found myself revisiting Schweitzer's life and thought when I was introduced to Dorothy Day  whose autobiography is titled,  The Long Loneliness.
"We have all known the long loneliness and we have learned that the only solution is love and that love comes with community." - Dorothy Day
I read Day for many years in bits and pieces as she was quoted by others who shared her devotion to "the care of the least of these," her hands-on care of the poor and displaced, and her social activism.  At first I considered her difficult, strange, and radical but I have come to see that meaningful faith is radical. I've done much of my reading of Dorothy Day digitally but her Selected Writings is part of my print library.
"I have long since come to believe that people never mean half of what they say, and that it is best to disregard their talk and judge only by their actions." - Dorothy Day

There was a time when Rachel Carson's Silent Spring would have been on my list. It echoes Schweitzer's "Until he extends his circle of compassion to include all living things, man will not himself find peace."
Rachel Carson writes beautifully and her work is the bedrock of the environmental movement. "In Nature, nothing exists alone." - Rachel Carson  As much as I love it, I do not have a copy of Silent Spring in my print library so I turned to Annie Dillard.
I was introduced to Dillard as part of a course on environmental writers but her work is so much more. She has taught me more about seeing the profound in the prosaic, the eternal in the passing moment than any other prose writer. Her books are both environmental and theological in tone and outlook.  I posted both Pilgrim at Tinker Creek and the lesser known Teaching a Stone to Talk, Expeditions and Encounters.
"The notion of the infinite variety of detail and the multiplicity of forms is a pleasing one; in complexity are the fringes of beauty, and in variety are generosity and exuberance." - Annie Dillard

The seventh book I posted was W. Caleb McDaniel's Sweet Taste of Liberty. A True Story of Slavery and Restitution in America. It's an unusual choice for me for a couple of reasons: (1) it's history, very readable history but not a genre I dive deeply into and, frankly, I most likely would not have read it if it had not been written by a friend and (2) it's recently published and I read it within the past year. Ordinarily I allow a book to ferment a bit more before it becomes something that has had an affect on me.
This book tells the story of one woman and her fight for freedom and justice, justice that is defined as restitution. It gives a particular face to a pervasive problem.
This book popped onto my reading list at just the right moment when I am seeing more clearly how slavery has always been the Achilles heel of American Democracy. I thought we had fought and won the battle with the Civil Rights Movement and all we needed was some time to bring about "liberty and justice for all."
I see now that was wishful thinking. Seeing the cost of slavery detailed in one life makes it easier for me to extrapolate to the costs still carried by the black communities today.
Because I read McDaniel's book, I revisit Dorothy Day's radical social activism which is grounded in radical Christian practice.
A year ago, I'm not sure I would have seen (perhaps I wouldn't have even tried to see) a case for reparations. Having read this book, I gave full consideration to and endorse without reservation Pete Buttigieg's Douglass Plan for restorative justice. If you want to know about it here is the link:  https://peteforamerica.com/policies/douglass-plan/

So what other books were on the list?
Voyage of the Dawntreader. The Chronicles of Narnia by C.S. Lewis which shows how bravery, even in the very small, is powerful and effective in the battle between good and evil.  Reckless, radical faith is often needed and that is an idea that both Schweitzer and Day would have honored.

All such lists of books always call me to post one of my favorite theologians which means not only C.S. Lewis but these days whatever has recently come from the pen of either  Walter Brueggemann  or N. T. Wright. I went with this N.T. Wright because it is a very clear statement of how and why no one political party owns the Bible. This book is one of the many that has helped me formalize my insistence that I am neither Evangelical nor Fundamentalist and it is my Christian calling not to be.
The remaining selection is from my Evelyn Whitaker Library because it's my project and never far from my heart. I can never pass up a chance to make others aware of the wonderful writings of "the author of Tip Cat" who published anonymously.  Laddie was one of her first published works and tells of the story of a successful London doctor and his loving  mother and his failure to care for her. Over 20 years later Whitaker published another story reversing the gender. A woman nurse of exceptional ability and potential is called home to care for her aged and abusive father. Together the books present a deft contrast between gender roles and societal expectations.

Posted by K Cummings Pipes at 6:56 PM No comments:

The serious study of Hebrew Prophets is a dangerous business but the church where I worship is willing to grapple with serious things and to hear judgment and instruction. We have spent the last several weeks with the Prophet Jeremiah whose words all too often seem all too pertinent for our time.
Today I was asked to lead our congregation in a prayer of lament.
A biblical lament [there are many examples in the Psalms] is comprised of 5 parts: 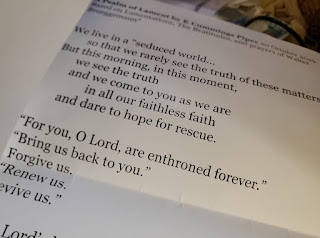 
Based on Lamentations and The Beatitudes
[I begin with the cry from the 130th Psalm. Phrases in quotations are from Lamentations with the exception of the one marked with * which is from Walter Brueggemann's collection of prayers, "Awed to Heaven, Rooted in Earth," Fortress Press, 2003.]

“See, O Lord!”
We have been “caught in the net and stumbled.
We have rebelled against you.
Our sins are a yoke around our necks;
we are enslaved in darkness.”
We take your blessing for granted
in our greed for more and in our refusal to share.
We take your mercy for granted
while refusing to be merciful
to orphans and strangers and exiles
who plead for help.
We claim to be your children
while making war, not peace.

We live in a “seduced world…  so that we rarely see
the truth of these matters.”*
But this morning, in this moment,
we see the truth
and we come to you as we are
in all our faithless faith
and dare to hope for rescue.

“The LORD’s kindness has not ended.
The LORD’s mercies are not exhausted.
Your steadfast love is new every morning.
Great is Your faithfulness!”

Posted by K Cummings Pipes at 8:54 PM No comments: